The Evil Dead is one of the most enduring horror franchises of all time. Three main movies: The Evil Dead, Evil Dead 2, Army of Darkness (a remake and a TV show), Ash vs Evil Dead and another movie coming to HBO Max this year (Evil Dead Rise), and many comics and video games are proof that director Sam Raimi’s comedy-horror franchise shows no signs of sleeping. When I saw there was an asymmetrical version of the franchise with Evil Dead The Game, I was excited to say the least. While it’s clear that the developers at Saber Interactive have love and respect for the franchise, there’s not much to it and some weird design choices make it look less than it might. ‘be.

The gang is here

The good news is that for fans of the series, there’s a ton to discover. Some of the characters you can choose to play range from Ash to his sister Cheryl from The Evil Dead, Annie from Evil Dead 2, Henry the Red from Army of Darkness, and even Kelly from Ash vs Evil Dead. Only fans of the remake alone will feel left out as none of these characters are present.

From the Kandarian dagger to the infamous shack, and of course the Necronomicon, all of the Evil Dead iconography is present and catered for. There are even little eastern eggs like “Shemp’s Cola” (not Shemp’s beer, for some reason) that make useful appearances in the game. The enemies you fight will be familiar to anyone who enjoys this franchise and the game even features voice work from Bruce Campbell, Ellen Sandweiss, Betsy Baker and more. All this to say that it is the most authentic Evil Game that has ever existed and for that Evil Dead: The Game deserves praise.

Unfortunately, presentation can only get you so far in a video game. It should always be fun to play, and while it might have its moments, Evil Dead The Game is more frustrating than fun. The main attraction of the game is the Survivors vs. Demons which allows up to four people to play as survivors and if you wish you can play against a demon AI. There is also the option to play solo in this mode. Each match consists of following the clues arranged in the upper right corner of the screen to find three map pages in different places on the map, before you can collect the Kandarian dagger and cleanse the Necronomicon of spirits. As you progress through the map, you might find better weapons, matches to start fires to lower your fear meter, or even Shemp’s Cola that heals you. 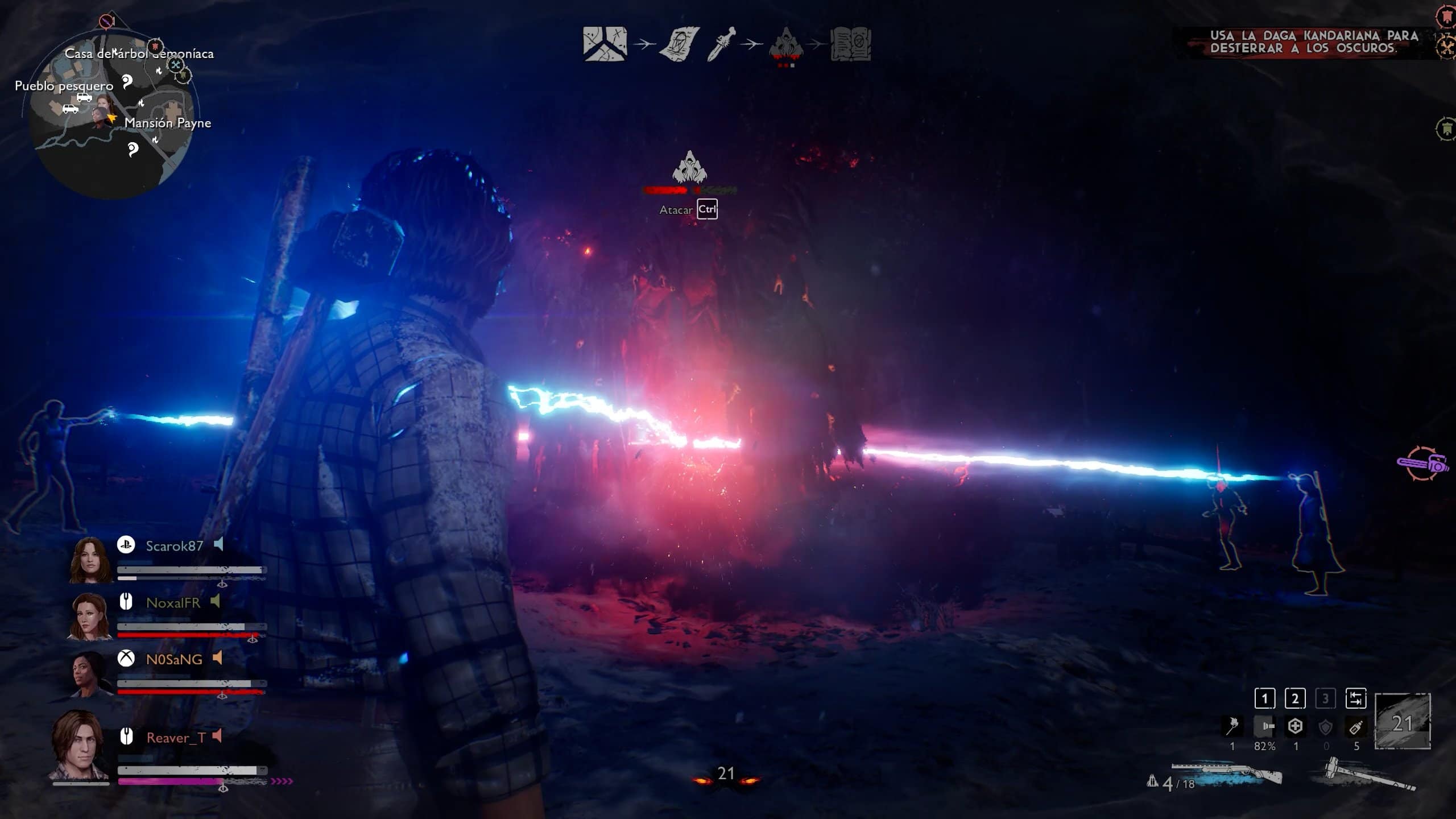 The gameplay offers wrinkles directly related to the Evil Dead franchise, such as if your fear meter gets too high, your vision is impaired, and you’re very likely to be possessed. Being possessed turns you against your teammates, but they can piss you off enough to get you out of it. If you die, a teammate can bring your soul to an altar and resurrect you. And while you’re trying to do all of that, random demons will appear out of nowhere and attack you.

As clumsy as a ’73 Oldsmobile

On paper, it sounds like fun, but the controls aren’t as tight as they should be. Aiming feels wonky and ammo is so low that I ended up using melee 90% of the time. Speaking of rarity, healing items are hilarious and frustrating. If the other teammates don’t choose a healer, rely on these ultra rare items which seem confusing to me. Targeting with a melee weapon isn’t much better, and the hit zones are pretty small, so unless you’re directly facing an enemy, you’re going to feel a bunch of swings. 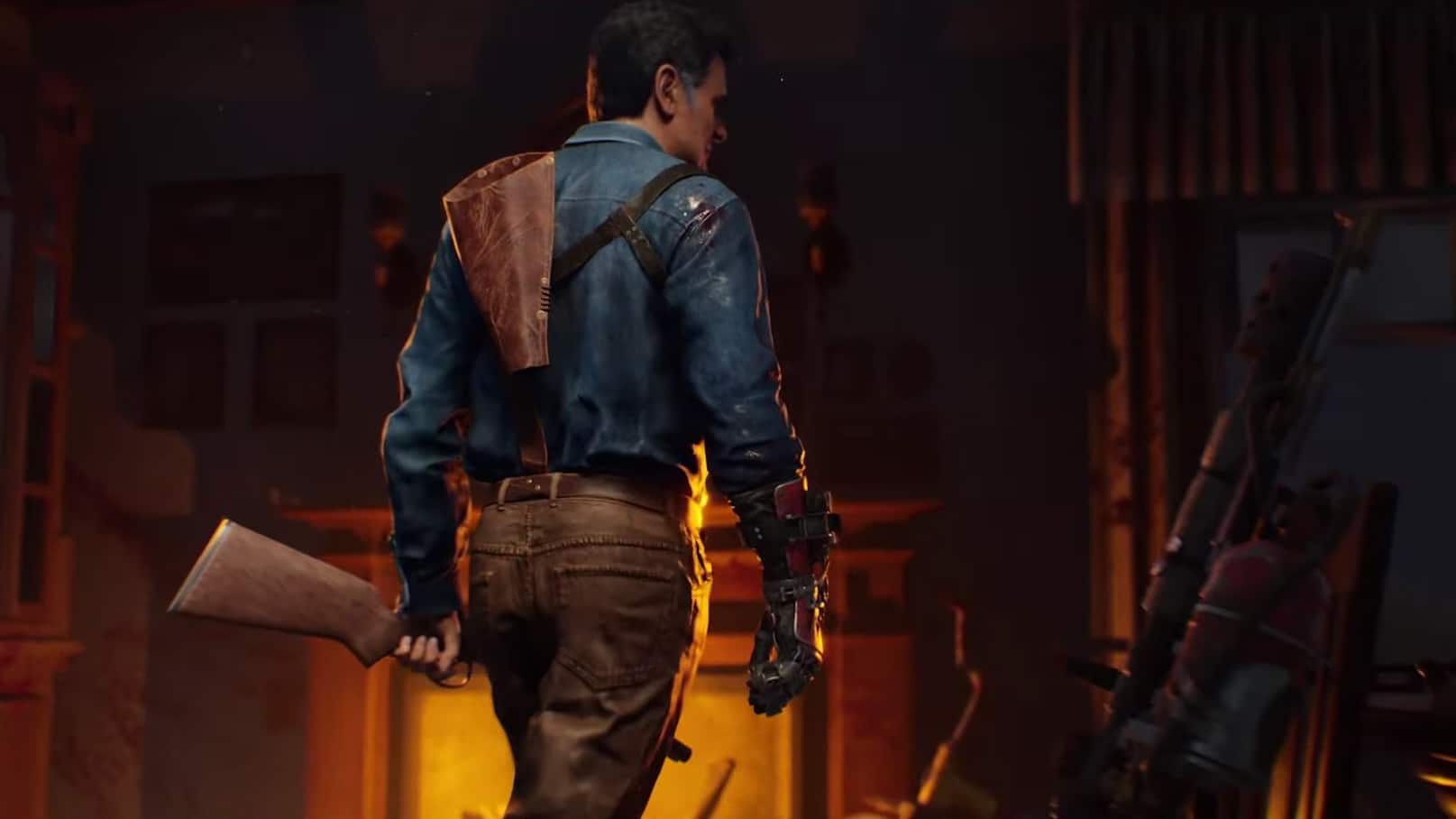 There are single player missions in the game which change things up a bit, but there are no checkpoints so if you die late in a mission you have to start all over again. There are games like that that I love, like FromSoftware games. But here it almost causes rage because the game isn’t fun enough to warrant that kind of design. After a while, I completely stopped playing the mode.

It’s ultimately more fun with friends, but only if they also love Evil Dead as a franchise. And even then, references and nostalgia can only get you so far. Ultimately, Evil Dead the Game can be improved by patches and I’ll be happy to come back to it when it’s improved. For now, I’ll stick to my movie collection for my Evil Dead fix.