RiffTrax: The PS4 Game Review. There’s something rather appropriate about What the Dub! Developer Wide Right Interactive puts a Rifftrax veneer on their game that’s modeled after exactly what Rifftrax does. A dubbing feedback loop that seems to culminate in some kind of unholy meta-monster rising from the depths to dub our very existence. I guess at least we would replace a lot of the tired talk with fart jokes.

Not that we’re not already on the path to metadestruction with Rifftrax: The Game. A board game where you can ask Twitch subscribers to comment on your comment of a game version of a movie commentary show. Hideo Kojima must be kicking himself for not finding that one.

Luckily, the game itself isn’t nearly as complicated as all that. It is, however, a fairly entertaining board game.

Rifftrax: The Game, as with a few other modern board games, is hosted on your console, but actually played through your phone/tablet/PC. Each player (up to six participants and 12 spectators) must enter the room code set up by the host player in order to join a game. 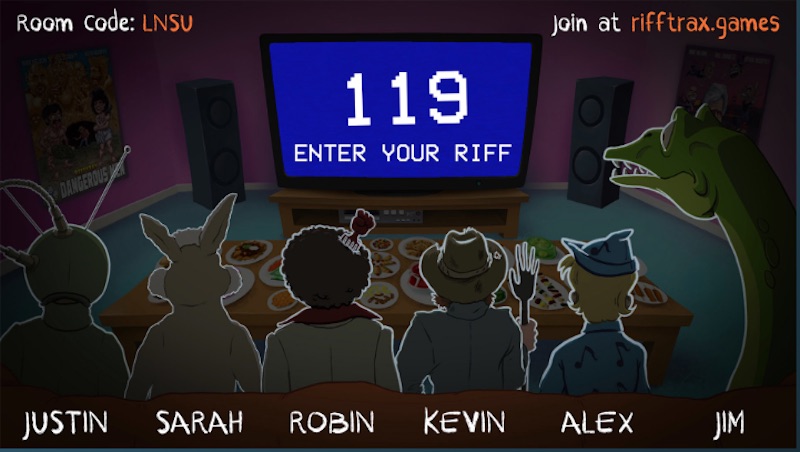 The game consists of multiple rounds in which each, one of over 250 clips from various public domain movies (ignore the repeated claims, these are all clips from ‘bad movies’. They are here simply because ‘they don’t cost a bean to use) plays, with a line missing in response to the one before it.

The player’s job is to either select one of the app’s roughly 2,000 standard dialogue choices, or create their own by typing it into the app and having it translated through a pretty decent text-to-speech feature. Throughout this time, a countdown is in place, and once it is over, or everyone has submitted their take, each is played without indicating who wrote what.

Players must then vote on their preferred line, and points are awarded for each vote received. Once the contest is over (you can go up to 10 rounds if you wish) the player with the most points is the winner. Simple and clean. Well, the concept is. The language usually is not. 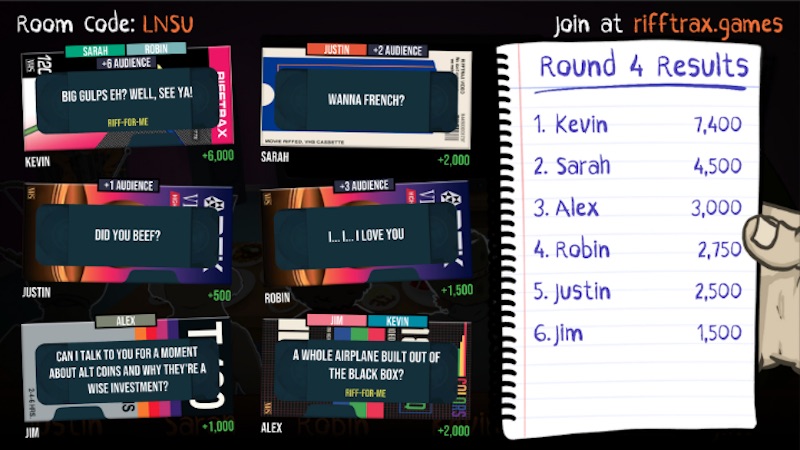 I appreciate the option of having pre-cooked lines for those who aren’t feeling particularly imaginative, but to me the option of writing your own riffs is infinitely more fun. Especially since you can dub just about anything you want, giving every clip a freshness no matter how many times you see it.

There’s even a modest suite of SFX options to drop into the lines, so you can end that devastating piece of dialogue you’ve written with an explosion and reverb fart sound. Because you are a different class.

Obviously it helps to have the right kind of people to play with and a common sense of what you find fun because nothing will derail a contest faster than sour grapes over what people have been up to and didn’t find it funny.

I guess the biggest gripe you might have with Rifftrax: The Game is that it’s a fairly simple package. Sure, you can add extra spins, filter naughty stuff for family play, and/or adjust the response submission timer, but that’s one mode and only one mode.

Solid and streamlined, but lacking a bit of customization

To be fair, I feel like any additional modes would be forced, and Wide Right Interactive deserves praise for keeping things streamlined and easy to understand – key factors in making a popular party game. Even so, it wouldn’t hurt to have a bit of customization for individual players and for the viewing room hub. A little extra that gives it a more personal touch. 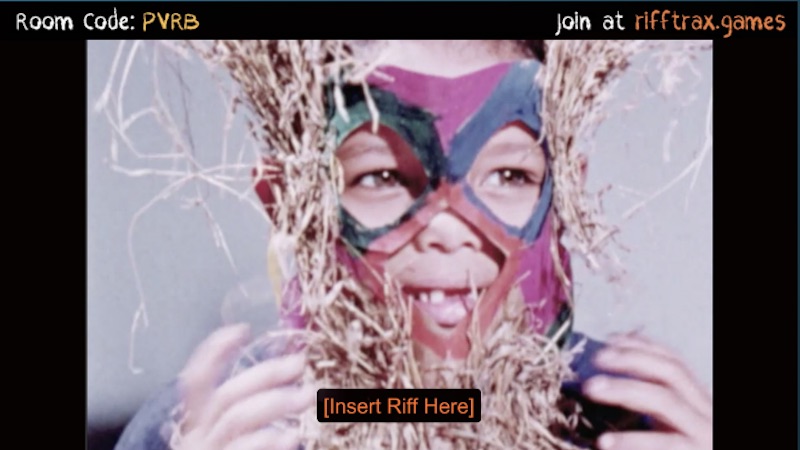 The only example of such a thing in Rifftrax: The Game comes from its “end credits” after a match, where it rolls out players’ names as actors, with various amusing roles assigned to them.

Yes, it’s still a very enjoyable time without it, but the player shouldn’t have to entertain himself even in a game like this. A little more attention and love to make it personal would have elevated Rifftrax among the greats of the genre.

I expect any future editions of this series (and there will most likely be more) will add a bit of extra detail or create new modes to make it feel like a worthwhile standalone purchase.

RiffTrax: The Game is out today on PS4.

Review code courtesy of the publisher.