Yes, you read that title right – Taco Bell has a game based on their food, but sadly, it’s not as ridiculous as the concept would lead you to believe. Simple to learn and quick to play, the Taco Bell Party Pack Card Game features a fun concept that just wasn’t as fleshed out as it could have been, but can be fun, especially for larger groups. 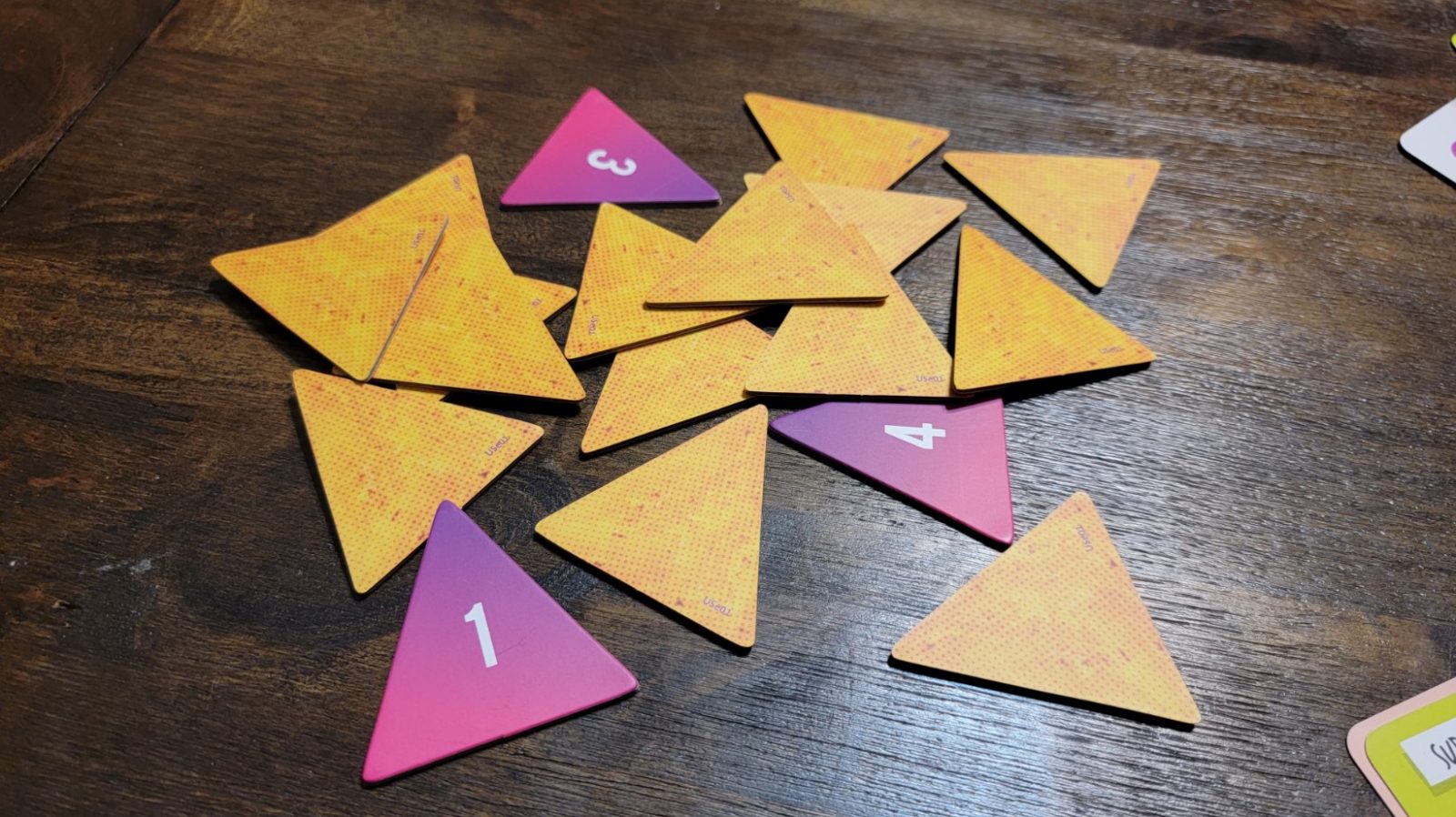 Let’s start with the good; Taco Bell Party Pack Card Game, released by Ravensburger, perfectly captures the aesthetic of a Taco Bell takeout box and will instantly capture the attention of anyone who sees it. Inside is a deck of 112 meal cards, a deck of 50 crew cards, and 18 thirst tokens. Cards feature animated, hand-drawn artwork and give the game a lighthearted feel while Triangle Chips – triangle-shaped chips that look like Taco Bell nachos and award extra points – help the game to feel unique and are made of strong material that won’t be easily damaged.

The game supports 2-6 players, but as a board game, the more players participating, the better it works. Each player draws 10 meal cards and randomly chooses 3 craving tokens. Thirst Tokens are all collected in a pile, placed face down to hide their point value, and will be removed by all players. 6 crew cards are then placed in the middle of the table and the game begins. 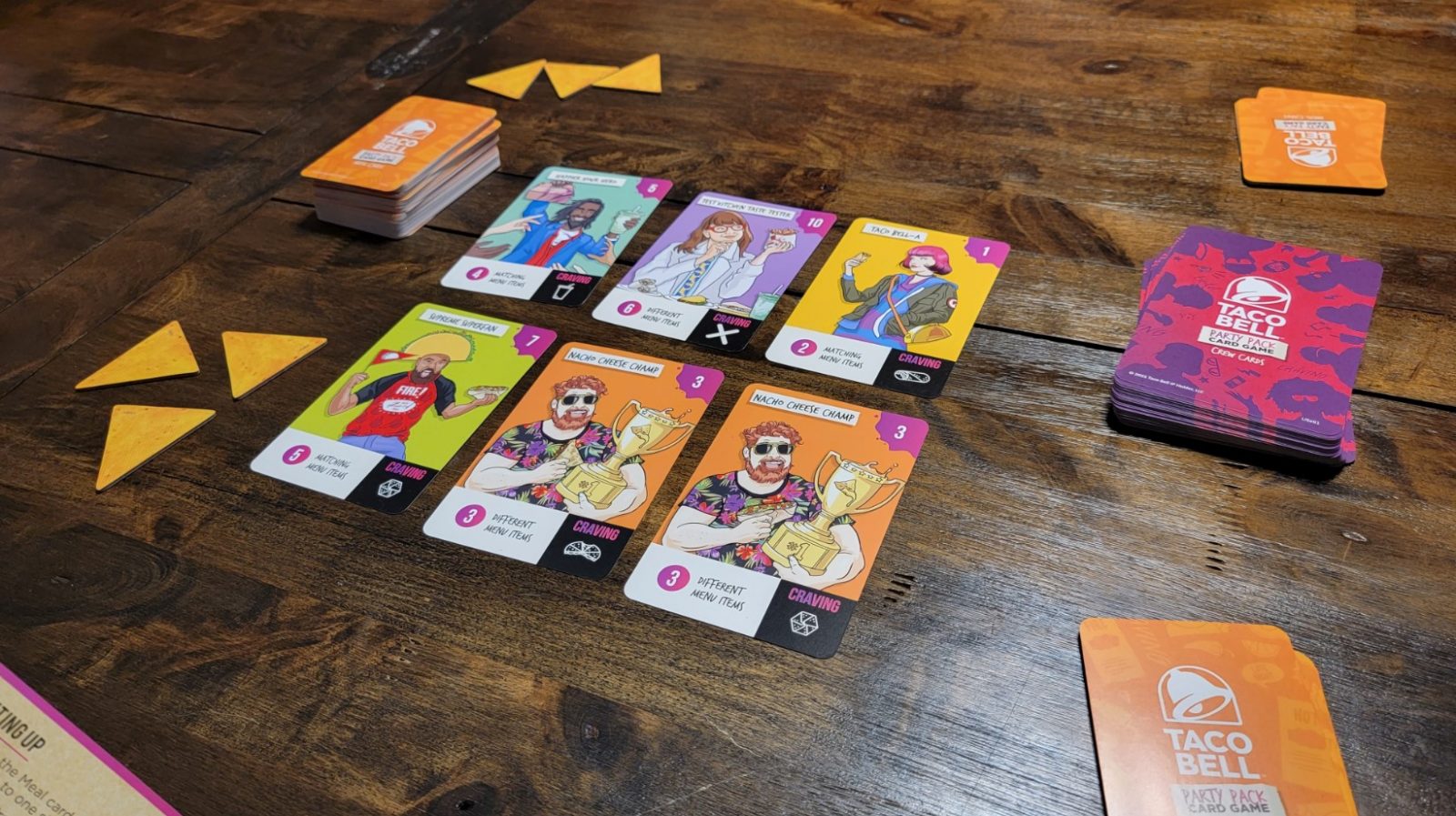 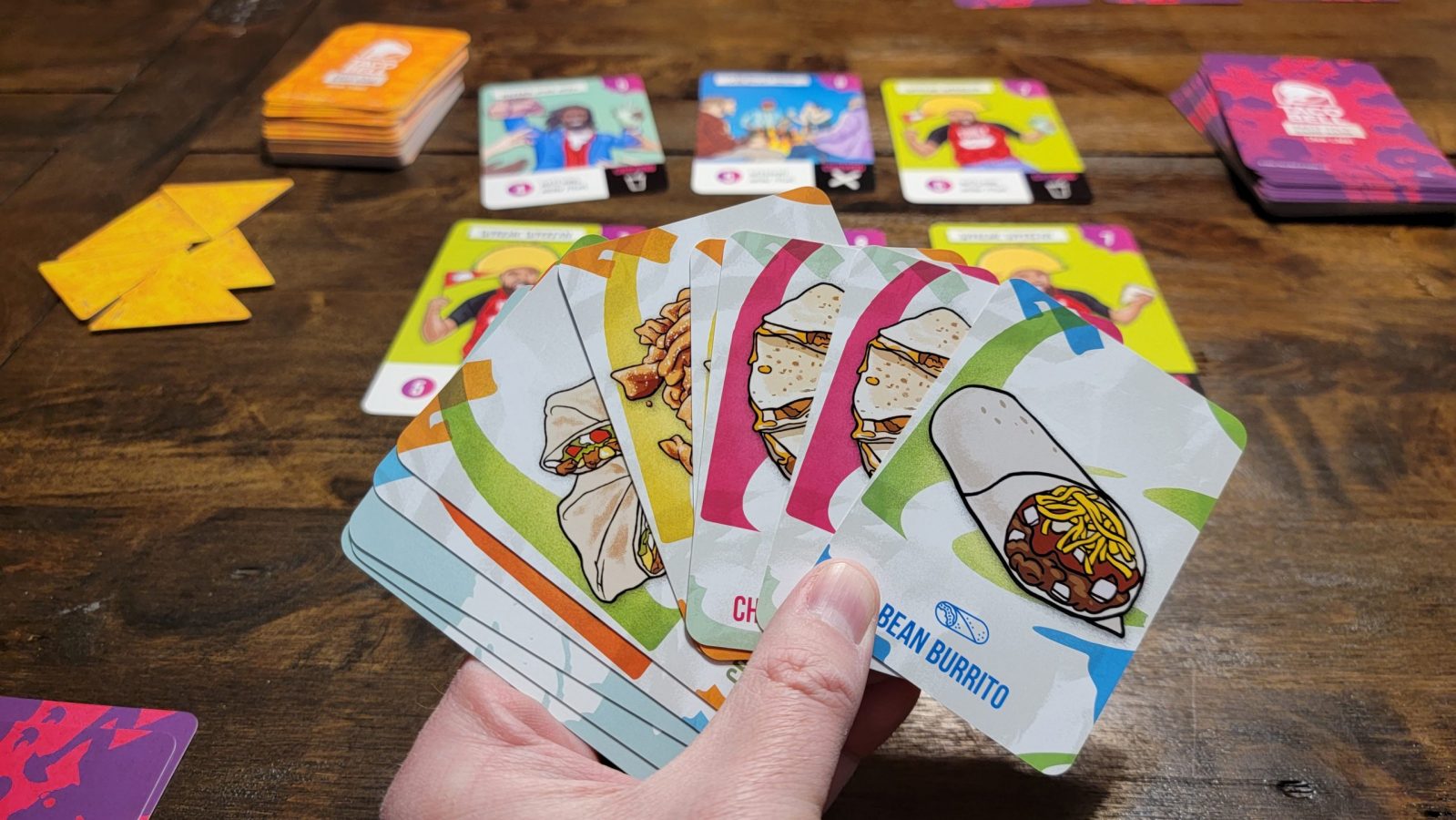 The player who ate Taco Bell last goes first, or the youngest player. Meal cards feature either a menu item – like a quesadilla, cinnamon twists, burrito, taco, crunchwrap, or drink – sauce packet or action card. One action card can be played per turn and grants special bonuses to the player, such as allowing you to choose a menu item and each player must give you their card for that item if they have it or allow you to draw an extra meal card to improve your current hand. Sauce packets give you an advantage, such as allowing you to feed two crew members in one turn or turn any meal you have into a meal of your choice.

Each turn, a player can either discard cards they are unhappy with and choose new ones to fill their hand or attempt to feed a crew member. Crew member cards specify the actions needed to satisfy their hunger and have a point value assigned to them. What is needed to satisfy a crew member’s hunger varies and can range from providing the crew member with two different menu items to six matching menu items. Satisfying that crew member’s hunger allows the player to take that crew card and add that number of points to their total. Adding an extra layer to the proceedings is the urge every crew member has. Besides what they need to satisfy their base hunger, most crew members crave a specific item, listed on the bottom right of their card. By satisfying that crew member’s hunger and also providing them with their specific thirst item, you are allowed to collect a thirst token from the supply, which grants additional endgame points. Once all Thirst Tokens have been earned, the game is over and players tally up their scores. The player with the highest score – based on the crew member cards they have acquired and their thirst tokens – wins.

Each game only lasts about 20 minutes, and while it can be fun, especially if players are dealt a good mix of meal cards, action cards, and sauce cards in each hand, it’s kind of anticlimactic. There is a bit of strategy involved as just feeding the easiest crew members isn’t necessarily the best idea and often saving your cards to feed a higher point crew member and satisfy her craving will be worth the extra effort when it comes time to add your points. Smaller groups of 2 or three will most likely fly through this game quickly, but larger groups of six highly competitive players can find ways to improve gameplay and keep each other on their toes. Unfortunately, no matter how you play, the game will end pretty quickly.

The Taco Bell Party Pack Card Game would make a fun diversion at a party, but it’s not something most players will find themselves drawn to on a regular game night. While I was enjoying my playthroughs and greatly enjoyed the overall packaging and design aesthetic, I had hoped for a game that was a bit sillier and more chaotic, given the premise.

Richard Allen is a freelance writer and contributing editor to various publications. When he’s not writing for Gaming Trend, you can find him covering theater for Broadway World, film and TV for Fandomize, or working on original stories. Passionate about retro games, he is too obsessed with Dragon’s Lair. Chat with him via @thricetheartist on Twitter and @richardallenwrites on Facebook and Instagram.