For some reason, video game movie adaptations are always difficult.

Since 1993, there have been dozens of video game movies, and most of them have been absolutely awful. But Hollywood keeps trying, and now the hit series “Uncharted” is next. The movie has Tom Holland as the main character who is getting a lot of attention considering his popular “Spider-Man” movies. Can Holland’s popularity help break the curse of bad video game movies?

“Uncharted” is based on the video game series exclusive to Sony’s PlayStation consoles. The series follows Nathan Drake, a treasure hunter with extensive knowledge of explorers, expeditions and treasures. Drake battles mercenaries and other treasure hunters for rare legendary treasures. He must also rely on climbing and climbing mountains, cliffs, trains, shipwrecks, cargo planes, etc. I am a big fan; you may have noticed.

“Uncharted” is directed by Ruben Fleischer. “Venom” and the two “Zombieland” films are probably his most familiar works. These four cover action and horror/comedy movies. Fleischer also directed “30 Minutes or Less,” a comedy, and “Gangster Squad,” a period action thriller. So this guy covers a lot of different genres.

The adventure begins when bartender Nathan Drake is recruited by Victor Sullivan, better known as Sully. Sully is a treasure hunter with Drake’s older brother, Sam, who has disappeared. Sully needs Drake’s help to find Sam and a treasure from Magellan’s expedition worth billions. However, Santiago Moncada, a dangerous scion of the Moncada family who directly funded Magellan’s expedition, is also after the treasure. Believing he has inherited the claim to the treasure, Moncada has a squad of mercenaries ready to kill anyone who gets in their way.

Video game movies have a bad reputation. It started from the first video game adaptation, the infamous “Super Mario Bros.” From there, other attempts were made for video game movies, such as “Double Dragon”, “Street Fighter”, “Alone in the Dark”, “Doom”, “Hitman” and “Max Payne” . For the most part, these films were panned by critics and fans.

However, over the past 10 years, video game movies have gotten better. Don’t get me wrong, they usually get mediocre, but it still gets better. Probably the best lately have been “Sonic the Hedgehog” and “Pokémon Detective Pikachu.” New series “Halo” coming out soon looks pretty good on Paramount Plus, WHAT I DON’T HAVE!!!

Probably the best part of this movie is Tom Holland. I know, big surprise. Holland managed to capture the tone and mannerism of video game character Nathan Drake. He is also quite funny, making jokes and total confusion in the middle of fights. It’s a total Drake move in the game.

If I had anything to say, it’s that Holland is just too young to fully connect with the character. Not that it’s his fault; it’s just how they cast a 20-year-old actor to play a well-known character in his late thirties. Imagine if they made a movie about Darth Vader, but they had a nine-year-old kid playing him. That would be… oh wait, they did do that already.

While Holland’s casting has its pros and cons, Mark Wahlberg as mentor Victor “Sully” Sullivan is waaay. Wahlberg basically plays Mark Wahlberg as Mark Wahlberg disguised as Sully. In other words, he plays himself while calling himself Sully from time to time. He doesn’t even have a mustache for this movie, and that’s a mark of Sully, Marky Mark!

The performances of the other actors were hit or miss. Sophia Ali’s performance as Chloe Frazer was perfect casting. Ali looks and acts like the character from the games. Too bad the film underestimates his character. Well, maybe she’ll have more in the sequel. Antonia Banderas was forgettable as a rich villain who wants more wealth to be even richer and meaner. The only thing missing were dollar signs over his eyes and a thin mustache to twirl menacingly.

As a fan of the games, the main thrill was unlocking elaborate puzzles in long-lost tombs and vaults to find priceless treasures. In the end, they often turn out to be cursed artifacts or something. In this film, the puzzles are quite obvious. The kind of evidence that makes you wonder how a Papa John’s pizzeria was built around one of them, especially in Barcelona, ​​Spain. Plus, Papa John’s in Barcelona is just the weirdest product placement.

Not to mention that Barcelona is a lively city. How people didn’t stumble upon one of these puzzles is a different mystery. The games had these settings in isolated areas, many of which hadn’t been seen in centuries. Even the treasure is on an island that’s also a luxury resort. You’re telling me the guests didn’t go around the island with scuba gear and find this cave? Not to mention that the ships containing the treasure sit directly under a gaping hole large enough for planes and helicopters to see? Speleologists and divers would have found this secret decades ago.

Did the producers use this island just so they could get a free vacation at the resort? 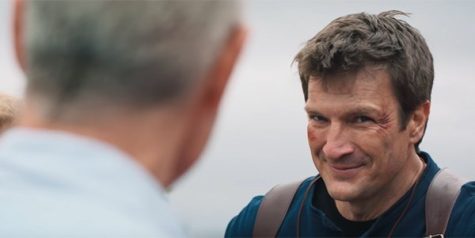 Fans of the game series have been asking for a film adaptation for years, with Nathan Fillion as their first (and only) choice for Nathan Drake. Fillion is a natural choice, with the looks and sounds of Drake and even shares the same first name! Eventually, a 15-minute fan-made film was put together, with Fillion finally in the role of Drake. It’s a fun short that’s very rewarding for “Uncharted” fans to watch. However, I am disappointed that the film did not have a spot for Fillion.

Speaking of cameos, Nolan North shows up for a scene. North voiced Nathan Drake in the game and performed a move legend. North is usually a voice actor, so it’s an easy cameo to miss unless you pay attention to his voice.

Another personal thing I liked about games was the music. The “Uncharted” series had fantastic music for their action and exploration scenes and had a memorable main theme for the entire series. The main theme score appears several times in the movie: during North’s (nice) cameo, and when Drake picks up a henchman’s shoulder holster, which completes Nathan Drake’s iconic look. Unfortunately, the two-strokes are really understated and short. The only other time you hear the score at full volume is during the credits.

Overall, “Uncharted” is decent and predictable. Its predictability isn’t based on the game series; it’s just a generic treasure hunt that lacks the originality the games are known for. The highlights are Holland’s performances and the action scenes. Other than that, it’s worth at least one rental.

A mid-credit scene is included. It’s a possible opening for sequels while connecting to the first video game. Sony seems pretty happy with the film’s success, so sequels are very likely. Plus, yay, Sully’s mustache finally makes an appearance!

“Uncharted” is currently playing in theaters.